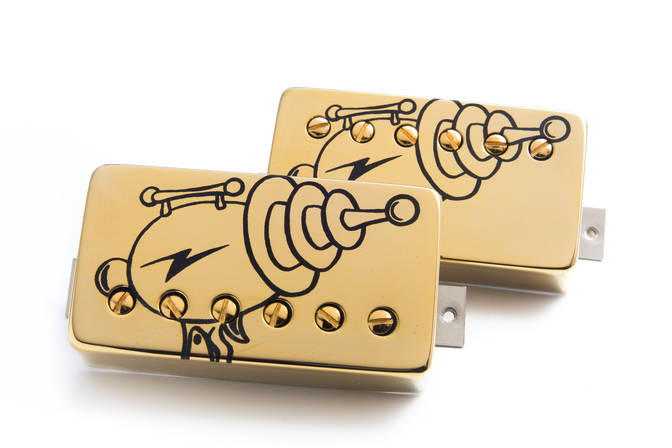 The Rebel Yell pickup was created with Billy Idol guitarist Steve Stevens, who wanted metal and impact but with a tone that cleans up well when backing off the volume.

“The Rebel Yell just growls with an even harmonic richness that I never hear in other pickups. It’s so full of clear bottom and perfect pick attack. These pickups are in a whole other league – they’re the real deal!”

When Steve first came to Bare Knuckle he was adamant that the signature pickups he wanted were not just ‘another metal pickup’. They had to be capable of a whole lot more. This kicked off a year of development and road testing while Steve was on a Billy Idol tour. Five of Steve’s Les Pauls were used as the vehicles for the design, and Steve also spent many hours in the studio testing the pickups. This extensive testing culminated in the Rebel Yell humbucker signature set.

Closer offset coils of 43 AWG plain enamel wire retain the mid range punch of the hotter Nailbomb but produce a tighter bass response with cleaner highs and more presence. This gives the pickup an organic voice with plenty of impact, perfect for any player wanting a progressive humbucker rich in harmonic overtones and wide pick dynamics. Steve uses his volume pot a lot when he plays, so it was important that the Rebel Yell cleans up well when backing off the volume, on top of being able to push a tube amp hard for a fully saturated overdrive.

The optional custom Ray Gun graphic on the cover adds a further unique touch to an already classic sounding humbucker.